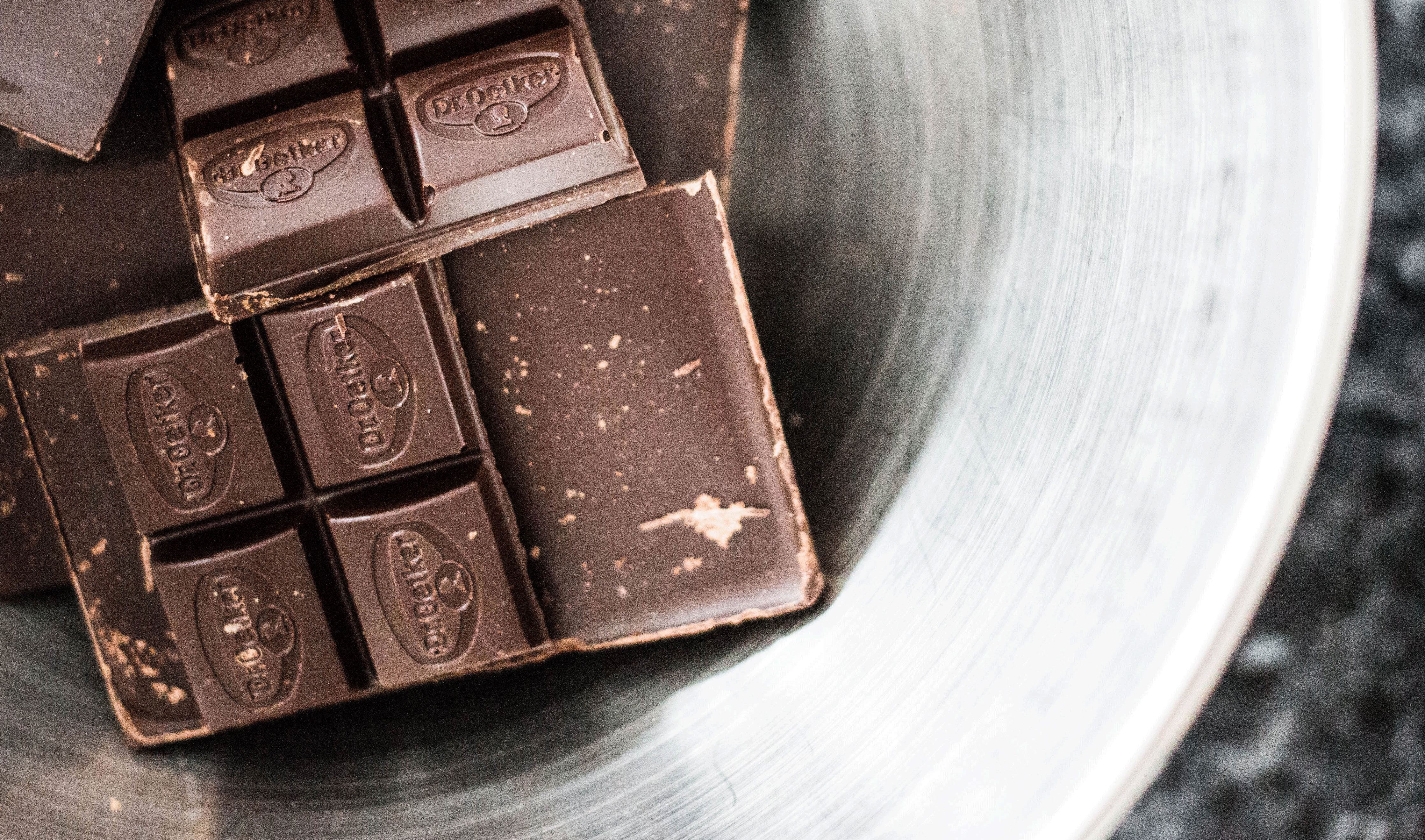 Have you ever wondered where the cacao beans of your favourite chocolate bar came from, and whether that has an effect on how good it tastes?

To investigate this further, myself and MDS classmate Carrie Cheung needed some very delicious chocolate data – we used this chocolate bar ratings dataset from Kaggle, which contains ratings by chocolate experts on over 1,795 individual chocolate bars. The dataset includes additional information about the chocolate bars, including where the chocolate beans were grown, cocoa percentage, and bean variety.

Since Venezuela is one of the largest producers of the Criollo bean, which is considered a delicacy, we set out to answer the following question using the chocolate bar ratings dataset:

Do chocolate bars made from beans grown in Venezuela have a different average rating compared to beans grown elsewhere?

The code for this project can be found in the project’s Github repository and the analysis can be reproduced by following the instructions in the Readme file.

The tools we used to produce this analysis included RStudio, Make, and Docker.

The data set contains ratings by chocolate experts on over 1,792 individual chocolate bars over the period of 2006 to 2017. According to Kaggle’s description, “[t]he database is narrowly focused on plain dark chocolate with an aim of appreciating the flavors of the cacao when made into chocolate.” Each row presents information about a single chocolate bar. The first few rows of the original data set are shown here:

Although the data includes additional information about the chocolate bars, including where the chocolate beans were grown, cocoa percentage, and bean variety, we are specifically focusing on 2 columns for this analysis:

71 rows were removed that were missing a location for the bean origin, with 1721 rows remaining.

To initially get an understanding of how ratings for beans from Venezuela compare to beans from other regions, we plotted the average rating for each bean origin and highlighted Venezuela in red for contrast.

Figure 1. Mean ratings of chocolate bars by cocoa bean origin for regions which had more than one rating. 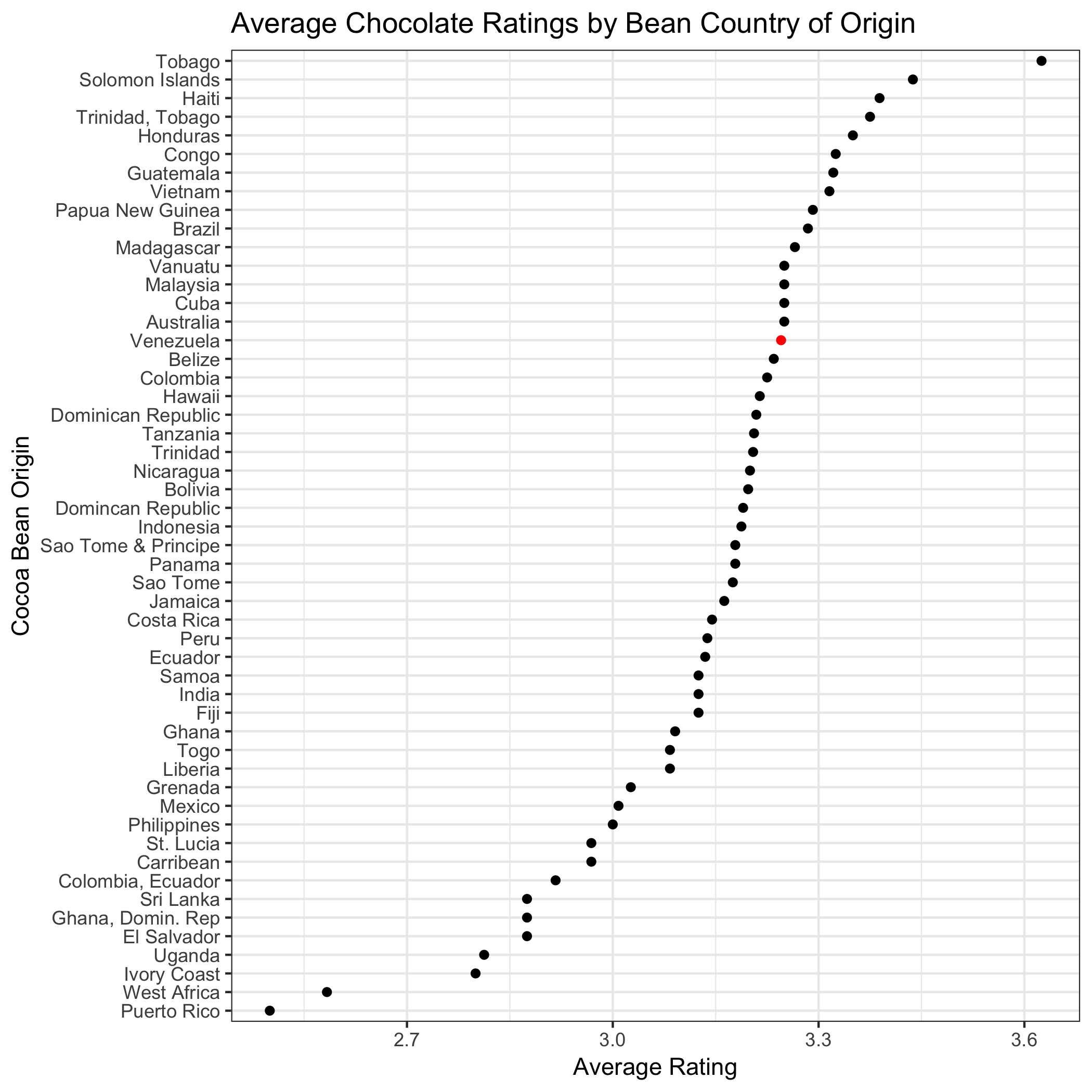 Note that in the plot, we excluded the following data:

From the plot, we can see that Venezuela is in the upper half of average rating scores; however we cannot tell whether the mean for Venezuela is significantly different from this visualization.

To answer our question, we re-formulated it into the following hypotheses:

We also computed the sample test statistic (delta_star), a 95% confidence interval, and the p-value:

The null hypothesis distribution is visualized below as a histogram overlaid with the sample test statistic in red to show where it fell in relation to our confidence interval: 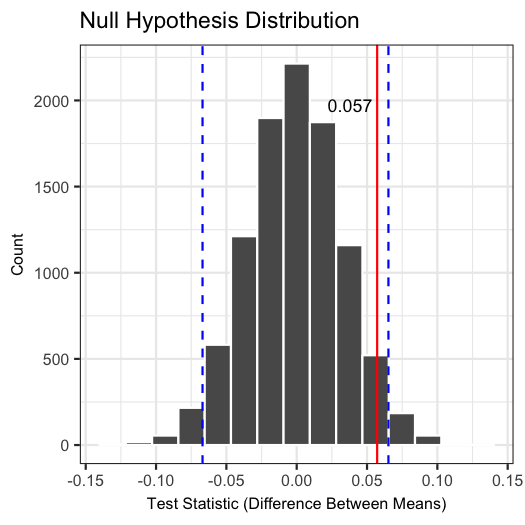 From the plot, we can see that it is not unlikely to obtain a test statistic as extreme as the one observed in our sample data under the null hypothesis. In addition, based on an alpha threshold set at 0.05 and a calculated p-value of 0.0923, we fail to reject the null hypothesis.

In this analysis, we conclude that there is not enough evidence to suggest that there is a difference in the average ratings of chocolate bars made with beans grown in Venezuela versus other regions.

This post was authored jointly by myself and Carrie Cheung.

Photo by Charisse Kenion on Unsplash